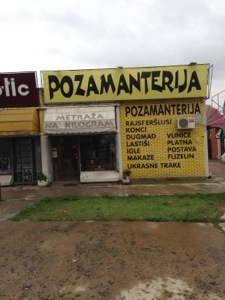 A couple of months ago, I decided to learn to knit, with the sole purpose of being able to knit a doggie sweater for Scarlett. In fact, the day I decided I wanted to start knitting, Grant had a business trip, so I sent him an email to see what he thought of me learning to knit. By the time he got home, two days later, I greeted him with my first project, a cute knitted headband. I was lucky in that I found the website of a knitting store in Belgrade and was able to go to it — although what I thought would take half an hour took nearly two!

Rarely are things as easy as they should be, and this was no exception. I had to ask numerous people where this particular store was in this strange indoor-outdoor strip mall-like place that also took me longer to find than it should have. Although the store is called Pozamanterija Marti I don’t think I would have figured out that this was the right pozamanterija had I not asked numerous people (no one ever has the same answer):

The important thing is that I eventually found the store and was able to buy needles and yarn. Fast forward about two months, a hat, some scarves, and a couple of headbands later… I decided it was time to try a sweater. Supposedly this pattern was “intermediate” level but I figured I should try it and see what happens. Although I was not true to the original Pattons pattern because I chose to simplify it, I think the final product is adorable and she liked enough that we had a photo shoot: 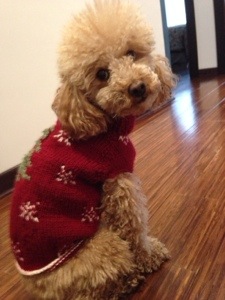 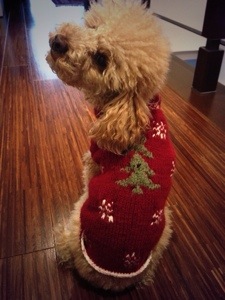 We ended up taking tons of photos, until she decided she’d had enough: